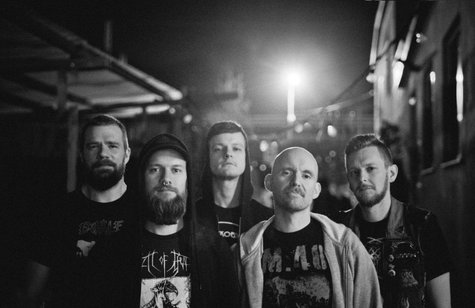 "Cheerfuk and pissed off at the same time, Grace.Will.Fall definitely sets a mark in terms of creativity and integrity."
- Slavestate Magazine

"Repetative parts of D-beat runs through the mashed song structures, to suddenly, without warning explode in an unparalelled richness of details."
- GAFFA

Grace.Will.Fall was formed in Jönköping, Sweden at the end of 2002 with the basic, simple idea to create wild hardcore punk rock and have a great time doing it. Since then we've played a couple of hundred shows and festivals all across Europe, together with bands like Godmother, Red Apollo, Entombed, Melt Banana, Skitsystem, M:40 and many many more. In 2008 we headlined the festival Phonofest outside Prague together with Deadlock.

Our first release was a split EP with local sludge crust heroes Counterblast in 2004, followed by a split EP with M:40 in 2005 to finally release our first album in 2007. After that we toured pretty excessivly and wrote new songs to release our Second Album in 2009 which got incredible feedback from both indie press and the bigger zines like Metal Hammer and Swedish national radio station P3. Since then we’ve released another two full length albums and a bunch of compilations, EPs and Split EPs with bands such as Lower Than Atlantis and MNMNTS, and made a couple of hundred live shows across Europe.

Our influences have always been very varied and all members of the band brings their flavour to the table. We always strive to make music that we enjoy playing and makes us energized to get up on stage. Of course there are a few key components when it comes to influences, like the chaos from Converge, playfulness of Dillinger Escape Plan and the rock ‘n roll attitude from The Bronx.